This article is a continuation of Part 1  and Part 2. We have setup our databases and the Oracle Identity and Access Management Suite and will now continue by provisioning the Applications environment.

This is the part where the real magic begins. First of all the provisioning wizard requests a lot of details about your environment in order to create a response file which is suited for your environment. Based on this response file the provisioning is performed similar to the provisioning of the Identity Management Suite, by following several sequential stages. Luckily Oracle has put in some great work in the development of this framework, as each stage is perfectly restartable in case of a failure (which unfortunately isn’t the case yet for the provisioning framework of the Identity and Access Management Suite). When a stage has successfully finished, the framework will automatically create a backup, and will be used by the framework to rollback and restore to in case of a failure in the next stage. Based on the findings described below, we were very happy with this solid recover and restart mechanism.

Yet another missing library (libstdc++.so.6)

While running the prerequisite check of Fusion Applications, we were faced with the following error:

) as soon as a step completed successfully.

Almost all provisioning stages went fine, until we reached the postconfigure stage. Be aware that reaching this stage really took several hours as the framework had to install required software components, as well as configure several WebLogic Domains during the install and (pre)configuration phases. Disaster stroke during the postconfigure stage as only one of the 7 steps succeeded as shown in the screenshot below. 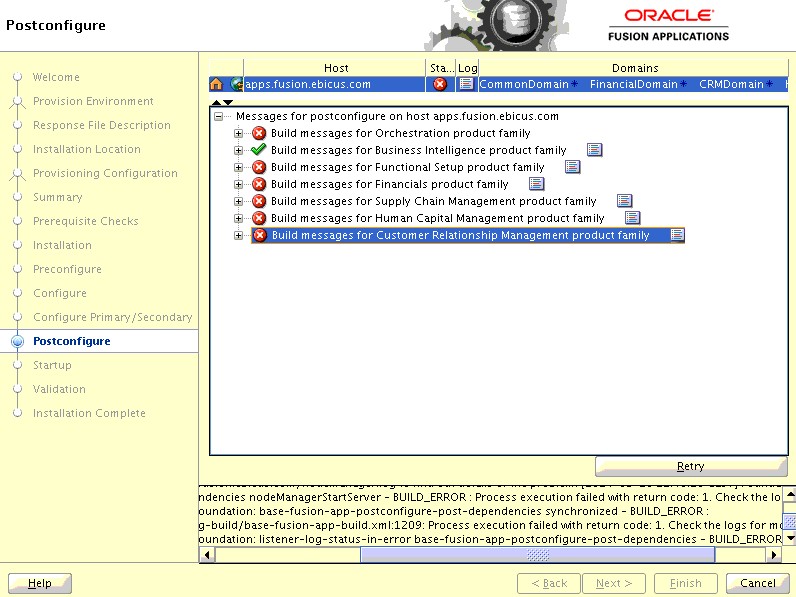 While searching through the logfiles we assumed that there was some kind of timing issue that not all components started in the appropriate order or in the required amount of time. Therefore we thought to give it just another try, without any modifications and by invoking the “Retry” button. As mentioned the Applications Provisioning Framework is perfectly restartable, but it also has another advantage: it only restores the steps which failed, so the parts which did succeed will remain. This really saves a lot of time! This attempt got rewarded as four steps now succeeded and we only got two failed steps left to be resolved as shown in the screenshot below:

After checking out some logfiles of the WebLogic Managed Servers (like the CRMSearchServer) which failed to start, we noticed the following error message: “MDS-00013: no metadata found for metadata object”, which might indicate some issues with the MDS schema of the Fusion Applications Database.

Also all verifications executed during the validation stage succeeded and didn’t report any issues!

In case you also like to setup your own environment for running Fusion Applications, please make sure to have enough hardware resources available. By taking care of the issues described in these articles, you should also be able to finish your installation successfully. Please be patient as some steps during the provisioning take quite a lot of time. Also when stages fail, don’t start to panic! As you’ve seen in these articles we also experienced some issues, but eventually they can all be resolved.